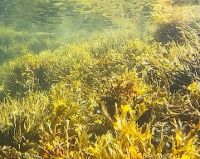 Algae fuel is also known as the third generation biofuels, and some energy experts believe that algae fuel is the biofuel of the future that will significantly decrease the need for fossil fuels, and with it help reduce the total amount of harmful greenhouse gases responsible for climate change problem. While there is no doubt that biomass production from algae certainly has the potential to deliver clean energy to the world, there are still some serious disadvantages that science need to find solutions before algae-based fuel industry becomes commercial.

Biomass production from algae has lot of advantages that need to be mentioned. I’ll start with high energy content. Some studies have showed that algae can yield over 30 times more energy per unit area than other, first and second-generation biofuel crops, and according to the U.S. Department of Energy, algae may be able to produce 100 times more oil per acre than soybeans, or any other terrestrial oil-producing crop. The U.S. Department of Energy has also stated that if algae fuel replaced all the petroleum fuel in the United States, it would require 15,000 square miles (40,000 km2), which is is less than 1/7 the area of corn harvested in the United States in 2000.

Algae are also characterized by the fast growth, and all what they need to grow are water, sunlight and carbon dioxide (CO2). The per unit area yield of oil from algae is estimated to be from between 5,000 to 20,000 US gallons per acre per year, and this is 7 to 30 times greater than the next best crop, Chinese tallow. Among other algae advantages I should also mention that they do not affect freshwater resources, can be produced using ocean and waste water, they are biodegradable, and in general biomass production from algae has almost no negative environmental impact.

Another major advantage of algae as a fuel feedstock is its massive consumption of carbon dioxide. Many of you probably already know that carbon dioxide is a greenhouse gas mostly responsible for climate change problem that is released in the atmosphere by fossil fuels burning. Some latest studies have shown that the production of each gallon of oil from algae consumes 13 to 14 kilograms of the carbon dioxide. And unlike the first generation biofuels (food crops)they do not have negative effect on global food supply and food prices as they do not take away the pieces of land from the cultivation of food crops.

The major disadvantage of biomass production from algae is that production is still far to expensive to be commercially viable, and the cost of various algae species typically varies between $5–10 per kilogram. The industry is still testing a wide variety of methods for growing algae; currently the most popular are open-pond systems, that in 2008 accounted for 98 percent of commercial algae biomass production. These systems are relatively cheap compared to some other methods for growing algae (such as bioreactors) but they have some serious flaws like the possibility of contamination by native algae species, evaporation, viral infection, and in most cases produce lower energy density algal oil.

Closed loop systems do not have contamination problems like open-pond system do but they also have one major disadvantage, namely to find a cheap source of sterile CO2 needed for biomass production, which is the reason why these systems are still unacceptable from the economical point of view. Bioreactors have proved to be the most effective systems that produce high quality algae but they are very expensive (high operational and maintenance costs), and therefore not economically acceptable for commercial production.

While it is more than obvious that algae have great potential for producing biomass it is still very unlikely that any significant commercial production will occur in the next decade or so. This is mostly because capital and operating costs make algae oil production too expensive to be economically acceptable. A lot more funding and research is needed to turn this great potential into commercially viable production, and it is still too early to say whether the future of biofuels lies in algae.