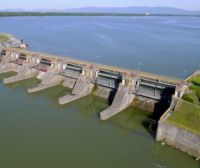 Hydropower is also referred to as the water power, and refers to power which derives from the force of energy of the moving water. Hydropower has very long history, and has been used since early days for irrigation, today hydropower is mostly used to generate electricity.

Hydropower is the most important renewable energy source in United States, which currently accounts for around 8% of nation’s electricity.

The biggest hydroelectric dams in the United States are found in the Northwest, the Tennessee Valley, and on the Colorado River.

United States is currently fourth largest producer of hydroelectricity in the world, behind China, Canada and Brazil.

The United States currently has more than 2,000 hydroelectric power plants which supply close to 50% of its total renewable electricity.

The largest U.S. hydroelectric power plant is the 6,800-megawatt Grand Coulee power station on the Columbia River in Washington State.

Idaho, Washington, and Oregon are US states that use hydroelectricity as their main power source, and hydroelectric plants exist in at least 34 US states.

State of Washington leads the nation in hydropower and accounts for around 31% of the total U.S. generated hydropower.

Hydropower has very long history in United States as the first U.S. hydroelectric power plant was opened almost 130 years ago, on the Fox River near Appleton, Wisconsin, on September 30, 1882.

US can currently generate enough hydropower to supply electricity needs for close to 29 million households.

In 2008, hydropower represented 2.5% of the total energy consumed in the United States.

Micro hydro systems are hydroelectric power installations that typically produce up to 100 kW of power, and are mostly used to provide power to an isolated home or small communities.

In some areas micro hydro systems are used to complement for solar energy panels. This is because in the winter, when the amount of sunshine is at minimum, available hydropower is at its maximum.

Micro hydro systems are very efficient because they require a very small amount of flow to generate electricity (around two gallons per minute should be enough). They are also very reliable, and their peak energy season is during the winter when water flow is the highest.

Micro hydro systems are not connected with high costs. A small-scale hydro-power system in average costs from $1,000 – $20,000, depending on site electricity, requirements and location. Maintenance costs are also fairly low.

Many energy experts believe small hydro systems would be one of the best energy options for developing countries because they are connected with low costs, and last for long time.

The main disadvantage of micro hydro systems are low power in the summer months because during the summer months there is less flow. Another disadvantage is the fact that is not that easy to find the suitable site to build these projects because you need to consider many factors like stream size, flow rate, distance from the power source, etc.

Micro hydro systems use several different types of water turbines, depending on the head of water, the volume of flow, and other factors like the availability of local maintenance and transport of equipment to the site. For mountainous regions where a waterfall of 50 meters or more may be available, a Pelton wheel is mostly used. For low head installations, Francis or propeller-type turbines are used while very low head installations of only a few meters may use propeller-type turbines in a pit.

Micro hydro systems have minimal environmental impact. Still, when building these systems constructors need to be cautious to ensure there will be no damaging impact on the nearby ecosystems.