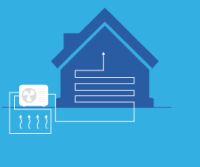 Geothermal heat pumps that are also often referred to as the earth-coupled, water-source, or ground source heat pumps have been in use for almost 70 years now, starting from 1940s. These pumps use the moderate temperature in the ground for both heating and cooling. The temperature below the earth’s surface remains at a relatively constant temperature throughout the whole year, usually in range between 45°F(7°C) to 75°F(21°C), which means that during the winter ground temperature is warmer than the air, and therefore is used for heating, and during the summer the ground temperature is colder compared to air, and is therefore used for cooling.

The difference between geothermal heat pumps compared to air-source heat pumps (for instance compressor) should also be mentioned here. While air-source heat pump transfers heat to or from the outside air, a geothermal heat pump exchanges heat with the ground, making this process much more efficient because underground temperatures are much more constant compared to air temperatures, that significantly vary throughout the year.

Geothermal heat pumps can be either open-loop or closed-loop systems. Open-loop systems draw well water for use as the heat source or heat sink, and after the use, return this well water to a drainage field or another well. Closed-loop systems use a water and antifreeze solution, circulated in a ground loop of pipe in order to extract heat from the earth. Ground loops can be installed in a vertical well or a horizontal loop. Horizontal loop is usually the most cost effective, and vertical loop is today only used where there is little yard space or when surface rocks make drilling difficult because of high drilling costs.

The thing that most people want to know about geothermal heat pumps is how much do they cost. The installation price of geothermal system is in many cases at least double the price of conventional system. In average, a geothermal heat pump system costs about $2,500 per ton of capacity, and the average household would require a three-ton unit costing around $7,500. This is not the final cost, as you also have to add the costs of drilling, and these costs can significantly vary depending on the area you live in and the quality of terrain. If for instance your system will have to be drilled vertically deep underground the drilling costs will be significant, and so the total cost of drilling can run anywhere from $10,000 to $30,000, or even more.

As you can see installation costs are relatively high, but the difference is usually returned in energy savings in 3 to 10 years, which is highly acceptable, especially since system life is estimated at 25 years for inside components and 50+ years for the ground loop. The components inside the house are small and easily accessible for maintenance, and the entire system works silently because unlike air conditioners these systems have no outside condensing units.

Each year in United States around 50,000 new geothermal heat pumps are installed, and worldwide there is currently more than a million installed units providing around 12 GW of thermal capacity, with an annual growth rate of 10%.