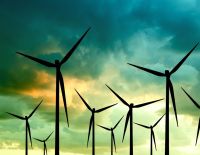 Fossil fuels (coal, oil and natural gas), are usually referred to as “dirty” energy sources because of the damage they do to our environment, and our planet in general. Fossil fuels, when burn release harmful greenhouse gases, mostly in form of carbon dioxide (CO2) which accelerate the climate change impact. Unlike renewable energy sources which can in certain situations cause some environmental damage fossil fuel burning always causes environmental damage.

Clean energy is not only needed to save the world from the climate change but also to ensure energy security for years to come. Fossil fuels will eventually become depleted, and once this happens world needs to have another solution ready, and clean energy certainly looks like the best possible solution.

Of course, it will take some time before clean energy sources replace fossil fuels, not only because fossil fuel reserves are at record high, but also because clean renewable energy sector has only started developing, and it needs certain period before being able to commercially compete with fossil fuels.

When it comes to “green energy” the things are quite similar. To put it as simple as possible green energy is energy produced from energy sources that are environmentally more friendly (or “greener”) compared to fossil fuels (coal, oil, and natural gas). Green energy therefore includes all renewable energy sources (solar, wind, geothermal, biofuels, hydropower), and by definition should also include nuclear energy though there are many environmentalists who oppose the idea of talking about nuclear energy as the green energy because of the nuclear waste issue, and its harmful environmental effects.

It also has to be said that term green energy doesn’t include only renewable energy sources but can in more broader term also include the conservation of energy (for instance a green energy example is also a building constructed in a way that it keeps itself cool in the daytime and heated in the night through its architectural design instead of relying on air-conditioning or a heating system).

The promotion of green energy does not only include using more renewable energy sources in years to come but also to make currently dominant fossil fuels energy technologies more greener and less polluting (such as clean coal technologies).