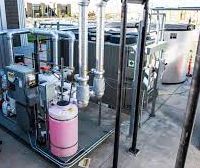 Thermal energy storage method has pretty straightforward working principle-a collector field collects solar thermal energy all the time the Sun is shining and stores it. Afterwards, when Sun is no longer shining plant can use this stored thermal energy to generate electricity which allows plant to work much longer than usual, depending on its energy storage capacity. Of course, this also decreases the need for natural gas as the backup option.

If the latest studies are true then thermal energy storage method is highly efficient, with the efficiency of around 92%. This is significantly better efficiency compared to other known energy solutions such as batteries and compressed air bags which usually have efficiency in range between 50-80%.

The proponents of this energy storage method will most likely say that the biggest advantage of thermal energy storage is its large storage capacity which means that this method enables the storage of many hours of electricity production. There are several thermal power plants in Spain using this method each of which has seven-and-a-half hours’ storage at 50 megawatts.

The one thing that this energy storage method will have to improve is its economics. The CSP plants costs are currently at around 16 cents a kilowatt-hour, which makes it quite an expensive energy option. Hopefully, technological improvements will soon bring these high costs down because the prices of photovoltaics are constantly dropping and CSP plants will have to follow this trend if they want to remain competitive.

The cost of the fields of collectors is mostly to blame for negative economics because a number of materials in them are pretty expensive, and since they need to have extremely precise shape their manufacturing process also doesn’t come cheap.

Researchers are already exploring the possibility of developing higher temperature heat transfer fluids that would allow them to go to higher temperatures which would not only improve efficiency of thermal energy storage but would also allow the bigger capacity of the storage system. This would also significantly improve economics of thermal energy storage method.