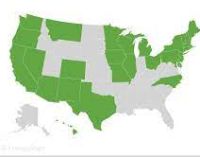 3. It would improve nation’s energy security by significantly reducing the chance for future energy crisis.

4. It would improve nation’s energy independence and reduce the nation’s dependence on foreign oil.

5. It would also mean less money spent on producing and importing dirty fossil fuels such as coal, oil and natural gas.

9. It would also help tackle climate change and air pollution, and improve the condition of our environment in general.

10. It would lead U.S. towards the clean energy future where renewable energy and not fossil fuels are dominant energy sources.