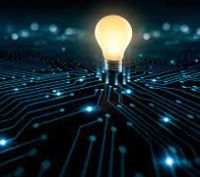 The word electricity comes from the Greek word ήλεκτρον (electron) meaning amber because electrical effects were classically produced by rubbing amber. The simplest way to define electricity is do describe it as the movement of electrons. This however is in fact the general explanation that encompasses a variety of phenomena resulting from the presence and flow of electric charge. Electricity, for instance, enables the creation and reception of electromagnetic radiation such as radio waves.

Though the effects of electricity have been studied since ancient times, the practical applications for electricity did not started to appear before the second half of the 19th century.

In order to explain electricity with more details we need to include electrical charges that come from protons and electrons. Protons have a positive electrical charge and electrons the negative charge. These two opposite charges attract each other but because electrons have a very powerful forward momentum they don’t just collide with nucleus of the atom but instead continue to move around the nucleus. A certain number of electrons that escape from their atoms and join other atoms are in fact creating electricity, or in the other words electricity is basically the story about electrons which have gotten away from their atoms.

Electricity is one of the foundations on which our modern way of life has been built upon and it would be almost impossible to imagine what our everyday life would look like without the electricity.

Fossil fuels, namely coal and natural gas are still the main sources of electricity in the world. However, renewable energy sources such as solar and wind should become dominant source of electricity in years to come.