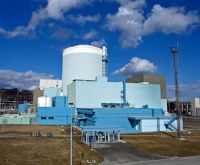 Even though I’m a big renewable energy fan, I believe it is still important to know how do other energy sources work, in this case nuclear energy.

Heavy water is special kind of water. Heavy water is called heavy because it is ten percent heavier than the ordinary water. This is because heavy water contains a higher than normal proportion of deuterium, a form of hydrogen.

The heavy water surrounds the nuclear fuel bundles, and slows down the neutrons. Neutrons need to be slowed down because by doing so they have the better chance to hit and split the uranium atoms. A chain reaction of uranium atom splitting ensures the constant source of heat to heat the heavy water. The heated heavy water is pumped through the reactor in the closed system through a set of boilers where it boils ordinary water into high pressured steam.

Afterwards, heavy water is recirculated back to the reactor to pick up more heat and cool the fuel. The high pressured steam made from ordinary water then gets transported to large turbines through large pipes where it pushes the blades and turns the shaft connected to a rotor in the generator. This causes rotor to spin, and its spinning creates electricity.