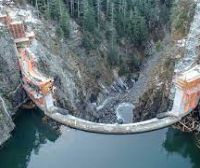 Alaska certainly has plenty of renewable energy resources at its disposal, and with the right policy the state could even become one of nation’s renewable energy leaders. However, even despite its excellent renewable energy potential Alaska is still primarily a gas and oil producing state.

There is only one renewable energy source currently playing the major role in Alaska – hydropower. Hydropower is currently supplying about 21 percent of the state’s electrical energy in an average water year. Hydroelectric projects can be found all over the state, and the interest for new hydroelectric projects remains high. Hydropower should therefore remain extremely important renewable energy source in Alaska for foreseeable future.

The same however cannot be said about wind energy. Alaska, despite having one of the best wind energy resources in the country is still far from becoming one of nation’s leaders in wind energy development. Alaska’s best wind resources are largely located in the western and coastal portions of the state.

Still, the Alaskan wind energy industry is showing some signs of improvement with many communities in rural Alaska developing new wind energy projects. A recent study of the value of distributed wind energy in a remote area of Alaska, in the tiny western Alaskan village of St. Mary’s, shows that the standalone wind turbine installed for a rural community provides significant economic and climate benefits.

Alaska also has excellent biomass potential which comes as a very little surprise when you consider the richness of Alaskan wood resources. However, burning wood releases harmful greenhouse gases in the atmosphere, meaning that any larger biomass production needs to be taken very carefully, and primarily from forests that need maintenance clearing.

Alaska also has excellent geothermal energy potential, with several geothermal hot spots located in the Interior, in the southeast portion of the state, in the area around the Wrangell Mountains and throughout the Alaskan peninsula.

The large solar energy projects don’t seem economically viable in Alaska, mostly because of Alaskan short winter days, but Alaska certainly has plenty of other renewable energy sources to choose from. As already said before with the right policy Alaska could soon become one of nation’s renewable energy leaders.

SB 179 and HB 301, the Governor’s bills call for regulated electric utilities to achieve benchmark renewable energy goals: 20% by the end of 2025, 30% by 2030, 55% by 2035, and 80% by 2040. This looks achievable not just because Alaska has plentiful renewable resources at its disposal but also because the state has relatively small population which means lower energy needs compared to other states