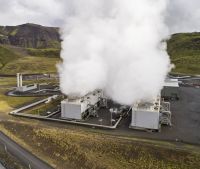 Geothermal energy is very reliable source of energy that does not suffer from intermittency like this is the case with some other renewable energy sources, most notably solar and wind. Geothermal heat is available 24-7 and is therefore one of the most reliable renewable energy sources, a one that does not require backup energy storage solution in order to guarantee reliability.

Geothermal power plants still somewhat lack worldwide appeal though this isn’t the case with geothermal heating because today there are more than 80 countries using geothermal energy for heating purposes in household, commercial and industrial sectors (2022 data). The main reason why world isn’t using more geothermal power is because geothermal power plants are currently cost-effective only in areas near tectonic plate boundaries though the recent technological advances such as EGS (enhanced geothermal systems) should significantly expand the range of viable geothermal resources in years to come.

In the end I also have to mention that enhanced geothermal systems can theoretically trigger earthquakes therefore severely affecting land stability if not done carefully.