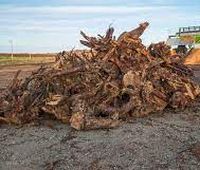 The burning of biomass is process connected with carbon emissions, in which the carbon that was once bound in the growing trees is released back into the atmosphere. In this sense, biomass is often talked about as being carbon neutral, though this is not always the case.

The 2011 study by the Swedish researchers at the University of Gothenburg concluded that the production of biofuels can have significant effect on ecosystem carbon stocks, and how it can take anywhere from two to one hundred years for different biofuels to achieve carbon dioxide neutrality.

In order for biofuels to help us reduce the current level of global carbon emissions we need to use biofuels that are beneficial on a short time scale, no longer than 20 years. Some researchers even argue that biofuels that need more than 20 years to reach carbon neutrality stage shouldn’t be considered as renewable energy sources because of their negative impact on climate change.

The question whether the world should use more woody biomass is still a highly controversial one.

The supporters of woody biomass are calling it environmentally friendly clean energy option that can not only help us reduce the amount of greenhouse gas emissions but can also improve our energy security by reducing the need for expensive foreign fuel import. The opponents say that biomass does not belong to environmentally friendly sources of energy because it could lead to even worse consequences to our environment than staying with fossil fuels.

The different studies have provided different results. For instance the 2011 study that examined biomass facilities in the southern U.S. found that burning wood instead of sticking with fossil fuels to generate electricity leads to a reduced amount of carbon dioxide in the atmosphere. However, this study also concluded that this reduction in carbon emissions would not happen fast enough to slow down climate change.

Some environmentalists have expressed their fears about wood-fed incinerators and the possibility that they would spew toxic fumes into the surrounding environment and use up valuable drinking water supplies which could lead to future water shortages.

There is also a concern that once biomass sector starts to expand it will no longer be enough to use just residue from saw mills but will also lead to cutting standing trees and a big increase in deforestation. Since forests are together with our oceans the largest carbon sinkers this would lead to a higher amount of carbon dioxide in the atmosphere.

What this all means is that not all biomass should automatically be categorized as carbon neutral, and in order to have positive impact on climate change, biomass needs to come from low-value wood residues or smaller trees coming from timber harvests. World must ensure protection of primary and old-growth forests, which sink carbon from the atmosphere, while also storing significant carbon stocks.