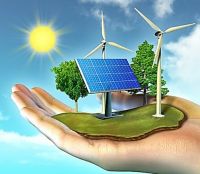 Contrary to what some people may think, climate change is not the only
reason why we should be using more renewable energy sources instead of
oil.

It is true that burning oil is one of the major reasons behind excessive
greenhouse gas emissions that have resulted in global warming and climate
change phenomenon and that this wouldn’t be the case if we would use
solar, wind or geothermal energy instead. But there are several other
important reasons that make renewable energy better options as compared to
oil.

Oil is just like the rest of fossil fuels (coal and natural gas) a finite energy
resource, meaning it will eventually become exhausted. By the most recent
estimates world has 47 years of oil left to be extracted. That equates to
somewhere in the region of 1.65 trillion barrels of proven oil reserves. What
this means is that oil is not the energy source to guarantee future energy
security because oil isn’t renewable energy resource and therefore cannot be
replenished.

Using more renewable energy and less oil would also improve our energy
independence because we are paying billions of dollars to oil-rich countries.
This money could be instead used to create powerful renewable energy
industry that would employ many people, give our economy a major boost,
and keep our own money within our own borders.

Oil prices are very volatile and the period of cheap oil seems to be gone
forever. Renewable energy technologies are constantly decreasing their
costs and the same cannot be said of oil.

Renewable energy gives variety of different options and countries can
choose from many different renewable energy sources (solar, wind,
geothermal, biomass, hydro resources) in order to find the one that has the
best potential and best suit their needs. This isn’t the case with oil because
the lack of domestic oil can be only compensated with the expensive foreign
import.

Renewable energy has enormous potential. Solar energy, for instance, is by
far the most abundant form of energy available on our planet and we should
be definitely making the most of it.