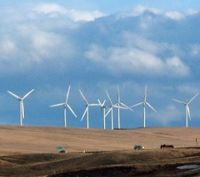 In 2022, wind power accounted for 3.5 per cent of electricity generation, being the second most important renewable energy source, behind hydropower.

At the end of 2021, Canada ranked 9th in the world for installed wind energy capacity with the total capacity of approximately 14,304 MW.

40% of all wind turbines in Canada are installed in Ontario.

Gros-Morne I and II combined is the largest wind farm in Canada with a total capacity of 211.5 megawatts (MW).

To decarbonize Canada’s grid, the country will have to increase its wind and solar capacity 18-fold by 2050.

The first commercial wind farm established in Canada was Cowley Ridge, built near Pincher Creek in 1993.

It has been estimated that Canada has an offshore wind energy potential of 9,321 GW.

Canada will introduce investment tax credits (ITCs) of up to 30% for renewable energy technologies such as wind. The credits will be available from 2023 and will be phased out from 2032.

Canada has targeted to produce nearly 100% of its electricity from renewable energy sources by 2035 and this can be achieved only with much stronger wind energy development, both offshore and on land.