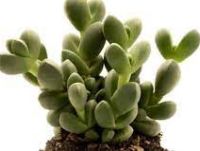 At first, this title looks like the stuff from SF movies. But scientists have actually inserted an iron anode into ice plant (Latin name Corpuscularia lehmannii) and platinum cathode into one of the plant’s leaves and found that its voltage was 0.28V.

This principle is based on the fact that in all living cells, from bacteria and fungi to plants and animals, electrons are shuttled around as part of natural, biochemical processes. What this means is that if electrodes are present, the cells can actually generate electricity that can be used externally.

Of course, the produced voltage of 0.28V is not breathtaking but they are representative of just a single leaf and connecting multiple leaves in series would likely increase the voltage.

The researchers specifically designed the living solar cell so that protons within the internal leaf solution could be combined to form hydrogen gas at the cathode, and this hydrogen could be collected and used in other applications.

According to American Chemical Society this method could enable the development of future sustainable, multifunctional green energy technologies.

Who knows, in future we may also consider plants to be a good source of electricity.