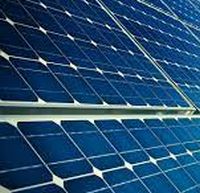 Solar panel prices are constantly decreasing but they are still not cheap because of the silicon, the main ingredient. There are many scientific researches that are focusing on developing cheaper solar cells, and some scientists believe the answer for this may lie in the perovskite. In tests, perovskite solar cells have achieved impressive power-conversion efficiencies of over 25%.

Semiconductor thin films made up of perovskite compounds are far cheaper to make than silicon solar cells, with greater flexibility and a tunable band gap. However, their main issue is said to be stability and durability. This is because compared to silicon, perovskites can degrade rapidly in real world conditions, with exposure to heat and moisture causing damage and negatively impacting device performance.

Researchers at Oxford University and Exciton Science have demonstrated a new way to create stable perovskite solar cells by removing the solvent dimethyl-sulfoxide and introducing dimethylammonium chloride as a crystallisation agent. This resulted in better control of the intermediate phases of the perovskite crystallisation process, leading to thin films of greater quality, with reduced defects and enhanced stability.

They took 138 sample devices that were then subjected to a rigorous accelerated ageing and testing process at high temperatures and in real-world conditions. During testing, the best device operated above the T80 threshold for over 1,400 hours under simulated sunlight at 65°C. T80 is the time it takes for a solar cell to reduce to 80% of its initial efficiency, a common benchmark within the research field.

Extrapolating from the data, the researchers calculated that the new cells age by a factor of 1.7 for each 10°C increase in the temperature they are exposed to, which is close to the 2-fold increase expected of commercial silicon devices.

What this means is that the perovskite may hold a key for the construction of cheap solar cells and that this material may become heavily used in the commercial photovoltaics in years to come.